Pilates is a method of total body conditioning developed by Joseph Hubertus Pilates. Born in 1880, in Germany, Pilates lived his childhood stricken with asthma, Rheumatic fever, and other illnesses.  It was because of this that he set out to learn everything he could about physical fitness.  He intensely studied the leading systems of body development that were being used in gyms, schools, and other institutions, as well as Eastern and Western philosophies and the ancient Greek and Roman regimens.  Pilates’ years of study and exploration seeded the roots of Contrology, the system we now call Pilates. 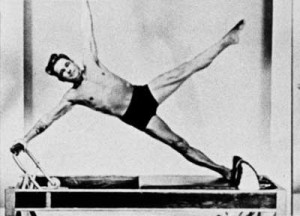 Pilates was living in England when World War I broke out and was placed in an internment camp.  It was there that he began teaching his method of conditioning and it was also there that the first prototypes of Pilates apparatus were fashioned from hospital beds and used to rehabilitate the sick and disabled.

After the war, Pilates made his way to the United States.  It was during his travels over that he met his wife, Clara.  In 1926, Joseph and Clara opened the first Pilates studio in New York City.  His teachings were strongly embraced by the dance community and also attracted athletes, gymnasts, circus performers and socialites.

During his lifetime, Pilates developed a repertoire of over 600 exercises and invented multiple pieces of revolutionary exercise equipment.  He aspired to have his method taught in schools and colleges so that his philosophy of total health and well-being could be learned at an early age and practiced throughout a person’s lifetime.  Pilates died in 1967 and never got to witness the explosion of popularity of his life’s work.

The Pilates method begins with mind control over muscles.  Integrating the total being (body, mind and spirit), not only strengthens the muscles and improves flexibility and the functioning of vital organs, it also invigorates the mind and develops the will.  Pilates apparatus utilizes springs and pulleys, along with your own body weight as resistance to work the entire body.  It is not just exercises to be mindlessly repeated to exhaustion and boredom.  It requires that your mind be clear, focused and present as each exercise is executed with coordinated breath and controlled and precise movements.  Pilates develops minor muscles that help to strengthen major muscles, thus each muscle aids in the uniform development of ALL muscles.  Careful attention is paid to form and alignment to correct imbalances, compensations and dysfunctional movement patterns.  In every exercise, movement and energy stems from the CORE or the “powerhouse”.  It is when the powerhouse is strong that the body can perform efficiently and effortlessly.